Welcome to the first of our Odd Jobs series, where we look at some of the more interesting jobs our locksmiths have recently faced. We’ll take a look at the work of our locksmith in Nottingham, who has had a number of memorable recent experiences (of which we’ve picked a choice three!).

One particular job that turned out be a surprise sounded like a routine task. He was called out to a property because the “door wasn’t locking”. However, it turned out to be a little bit worse than that…as you can see from the photo below! 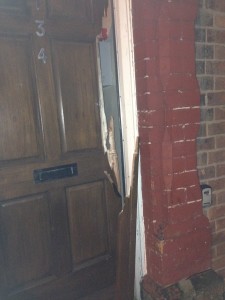 He had another surprise when asked to open a safe for a 101 year old customer. The safe had been sent up from London by a removals company, but the key had been lost. 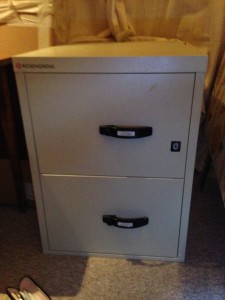 All safes present their own challenges (after all, they are designed to be extremely difficult to break into) but, as an expert locksmith, he had no problem gaining access! He was able to return the family silver collection and a wad of £20 notes to the owner.

Finally, he had another apparently routine task, in which he needed to change a lock for a store. When he attended the job, though, he realised that attempted burglars had actually gouged the lock out from its position.

However, there was a simple but smart solution to the problem. He installed a lock further up the door and put a metal plate where the hole was, securing the door until it could be replaced entirely.

So. there you have it – just a peek at some of the types of jobs our locksmiths have to do! 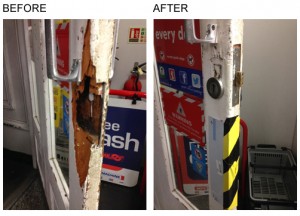